Now if you want to get your Harry Potter fandom on and completely nerd out, there are plenty of novelty replicas from the films belonging to your favorite characters. Find the wands of your favorites witch or wizard, some magical items that have been reliable tools to our heroes, or even get the entire book and/or film series to be added to your collection. 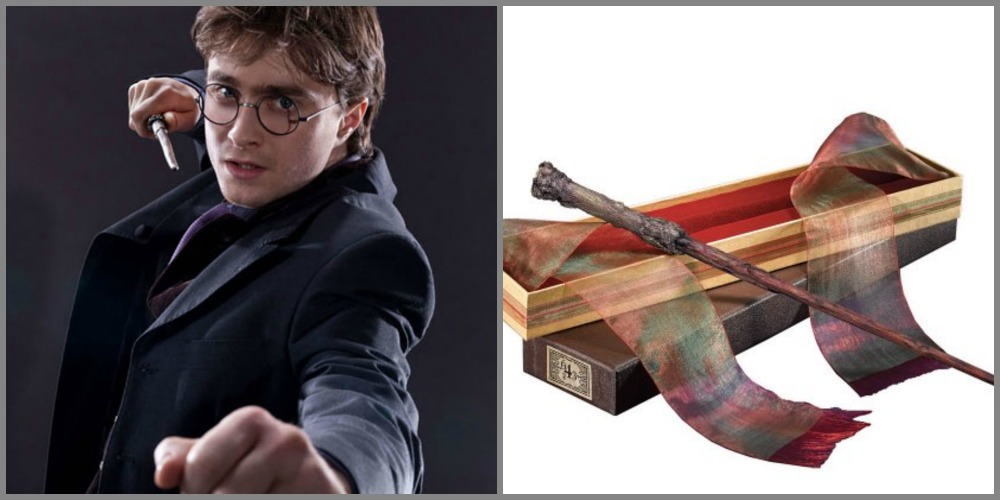 Harry Potter, known as “The Boy Who Lived” and “The Chosen One”, is the hero of J.K. Rowling’s world. An attempt made on his life ended with the death of his parents who sacrificed themselves to save him from one of the most terrifying villains in literature.
The replica wand is 14 inches in length. 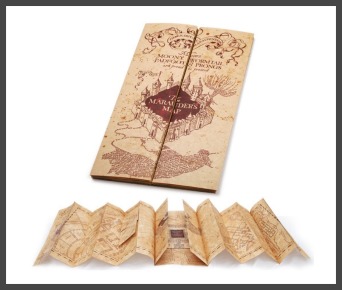 The Marauder’s Map is a magical document that can be considered a wizard’s GPS but only maps the Hogwarts School of Witchcraft and Wizardry. Created by:
– Moony aka Remus Lupin (Harry’s teacher)
– Wormtail aka Peter Pettigrew (traitor to the Potter family)
– Padfoot aka Sirius Black (Harry’s godfather)
– Prongs aka James Potter (Harry’s father)
The map was later taken by Fred and George Weasley (Ron Weasley’s older twin brothers) until they gave it to Harry Potter in the Year 3 book, Harry Potter and the Prisoner of Azkaban. The map replica measures 15.5 x 72 inches. 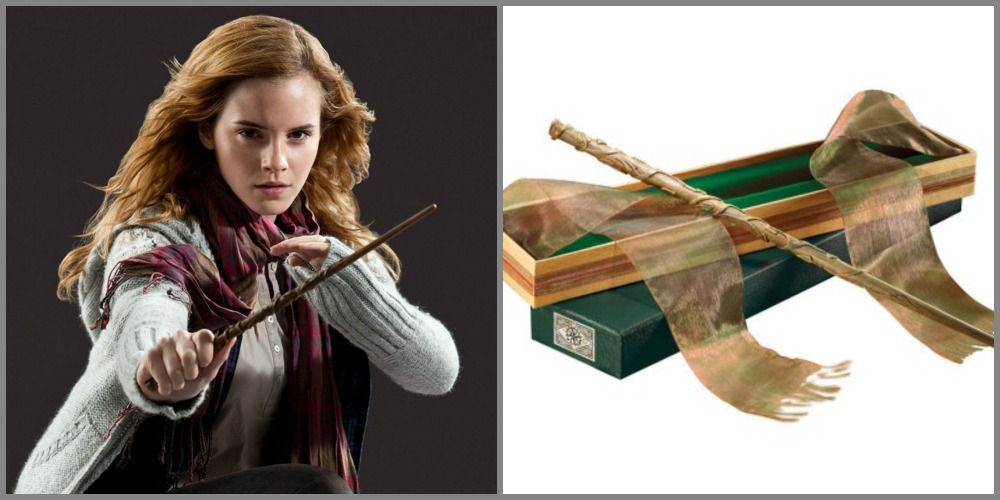 Hermoine Granger, the heroine in the story and trusted comrade to Harry Potter. She is considered very intelligent and incredibly resourceful which will aid Harry in his journey to defeat the Dark Lord Voldemort. The replica wand is 15 inches in length. 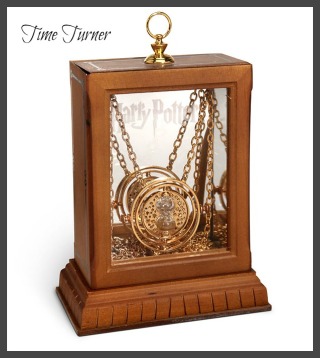 The Time Turner, a magical timepiece that looks like a pocket hourglass. It is a device used for time travel which Hermoine used to attend more classes than time allowed her. In Harry Potter and the Prisoner of Azkaban, this device proved crucial to save more than one life in the end of the book. 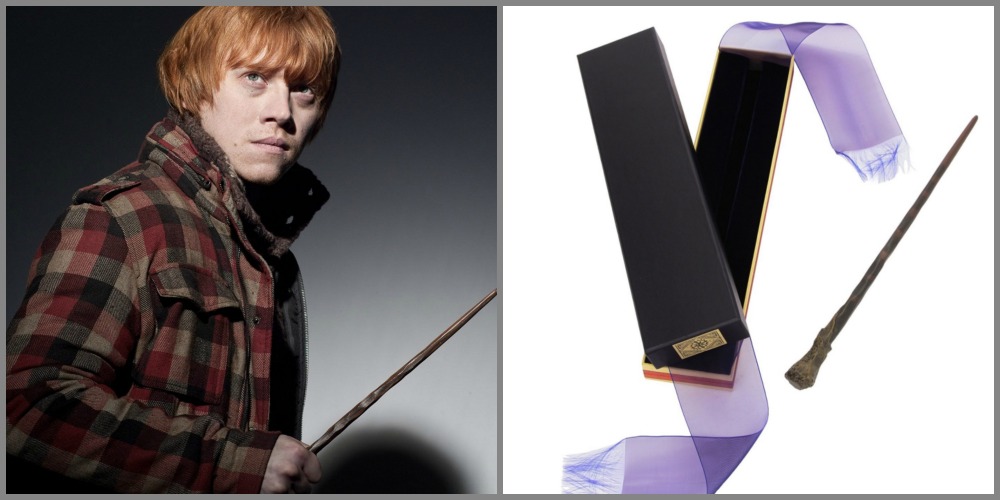 Ron Weasley, considered Harry Potter’s first true friend and most trusted ally, also betrothed to Hermoine Granger. Ron has been there with Harry and Hermoine in just about every challenge and predicament since their first years at Hogwarts, and time after time he has proved his courage and loyalty. The replica wand is 14 inches in length. 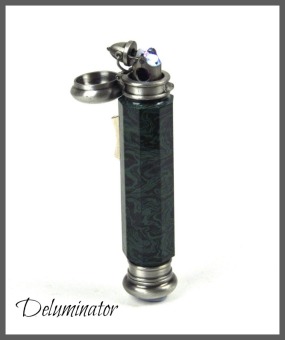 The Deluminator is first observed Harry Potter and the Sorcerer’s Stone when Harry first arrived at his uncle and aunt’s home the night his parents were murdered. Developed by Albus Dumbledore himself, its function is to remove light from it’s immediate surrounding which is used to secure an area. In Harry Potter and the Deathly Hallows, Ron Weasley inherited the Deluminator as ordered in Dumbledore’s Last Will and Testament, this device aided Ron in finding his way back to Harry and specifically to Hermoine when he left them on sour terms. 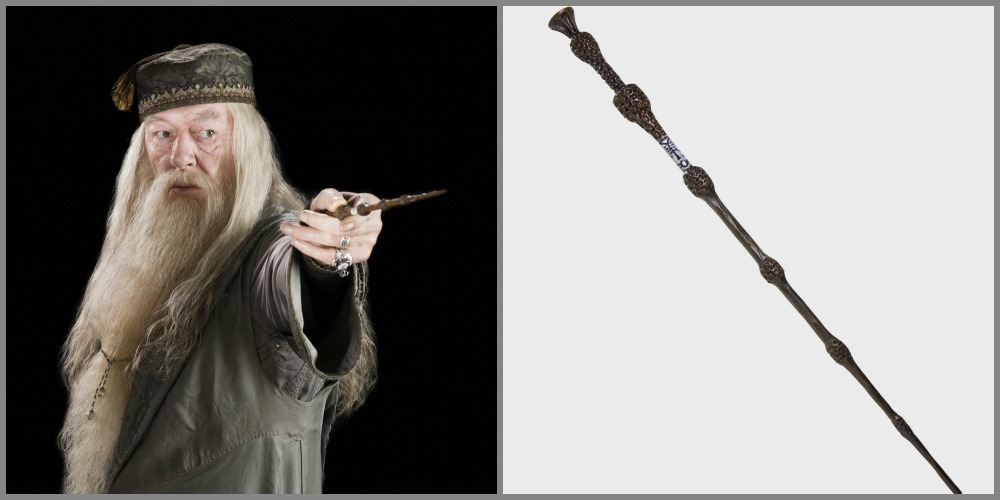 The most powerful wand ever created and one of the three legendary Deathly Hallows, wielded by the greatest wizard of the age. Before Lord Voldemort’s time, Albus Dumbledore faced and defeated the dark wizard Gellert Grindelwald at the end of the Muggle World War II, then becoming the new owner of the Eldar Wand since (this wand changes owners after being disarmed by another), until 50-some years later, he was disarmed by Draco Malfoy and assassinated by Severus Snape. The Eldar wand’s new master became Draco Malfoy (even though he did not know it) and later was disarmed by Harry Potter who became the new owner of the Eldar Wand. Upon realizing this, Harry snapped the wand in two, destroying it, so no one else will ever possess that power ever again. Unlike other wands, this uses Threstral tail-hair core.

Sirius Black, the godfather to Harry Potter and best friend to his father, James Potter. After the night Harry’s parents were murdered, Sirius spent 12 years in the wizard prison Azkaban for a crime he was framed for by Peter Pettigrew. It was in Harry Potter and the Prisoner of Azkaban when his innocence was finally realized. 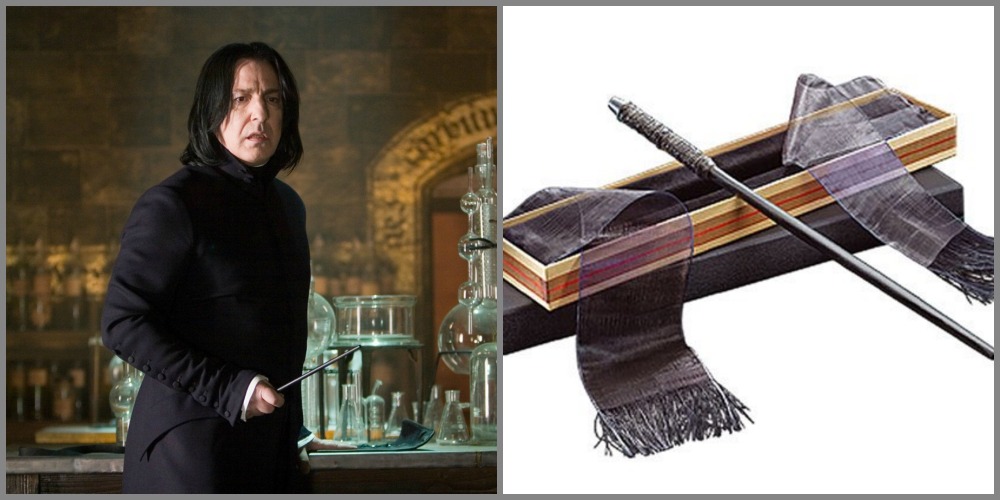 Severus Snape, a double agent to both Dumbledore and Lord Voldemort. Snape is a complex character that is difficult to read exactly what side he is on and what his motives are. He is a substantial potions master and trusted deeply by Dumbledore, even though most other characters especially Harry Potter is very wary of him and considers him a great threat.  The replica wand is 13.5 inches in length. 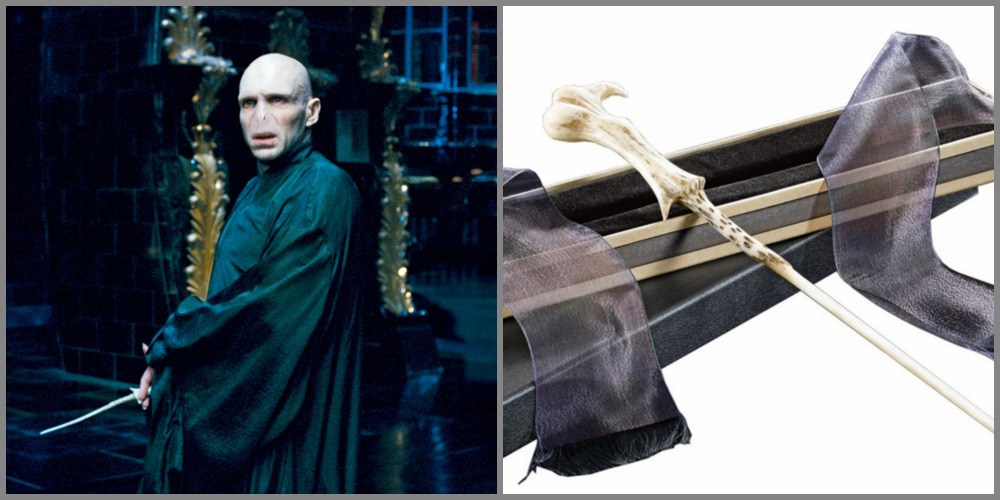 Lord Voldemort, the most feared dark wizard in the world of Harry Potter. Ruling for nearly a decade before Harry was even born, Voldemort had risen to a level of power and a reputation so terrifying, uttering his name is taboo.  The replica wand is 14 inches in length. 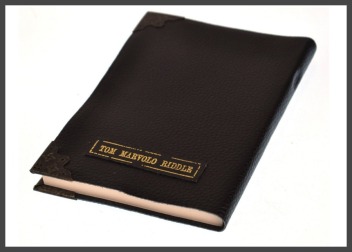 One of seven Horcruxes that binds Voldemort’s soul to the earth that grants him near-immortality. In Harry Potter and Chamber of Secrets, this diary is destroyed by Harry making it the first Horcrux destroyed before he continued the mission set by Dumbledore in Harry Potter and the Half-Blood Prince 5 years later. 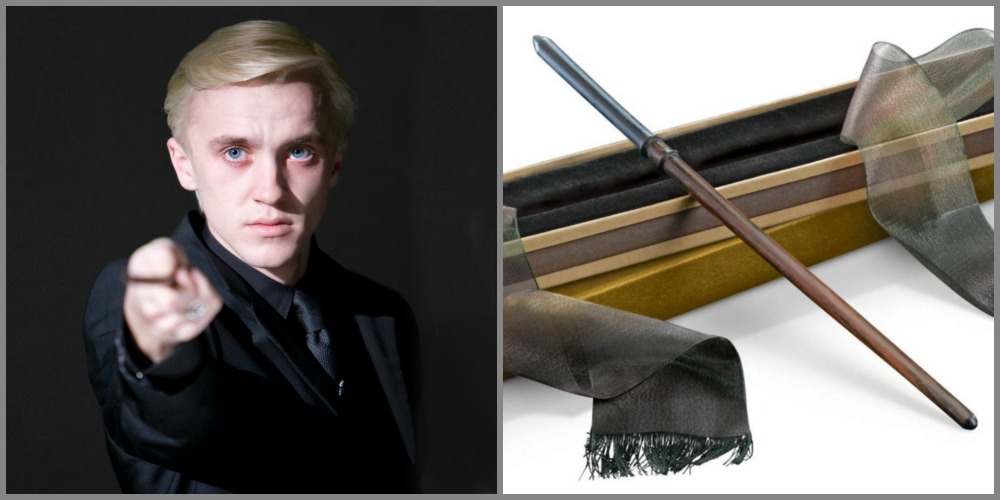 Draco Malfoy started Hogwarts the same year as Harry, Hermoine, and Ron. He is a son of the Malfoy family, considered the aristocrat wizards of their world and hold extremist views against Muggles (non magic people) and Muggle-borns (magical people born from non magical people). Draco is considered as the antagonist to Harry, aiding the dark forces to take Harry down but he is not entirely evil, merely enduring the dark alliance his family has with Lord Voldemort. 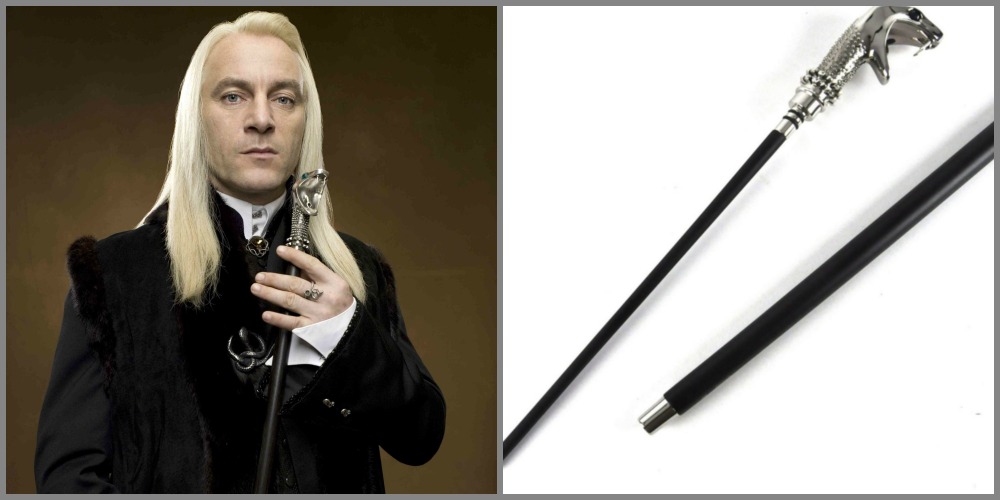 Lucius Malfoy, father to Draco Malfoy. Lucius is a wizard who works for the Ministry of Magic (a government for wizards) and a Death Eater (followers of Voldemort). Since Voldemort’s Return, Lucius has once again played his role as servant to his dark lord but at the cost of his dignity, honor, and the great danger his son is put in when given a mission to assassinate Albus Dumbledore.  The replica wand is 18 inches in length and the walking stick measures 46.5 inches in length. 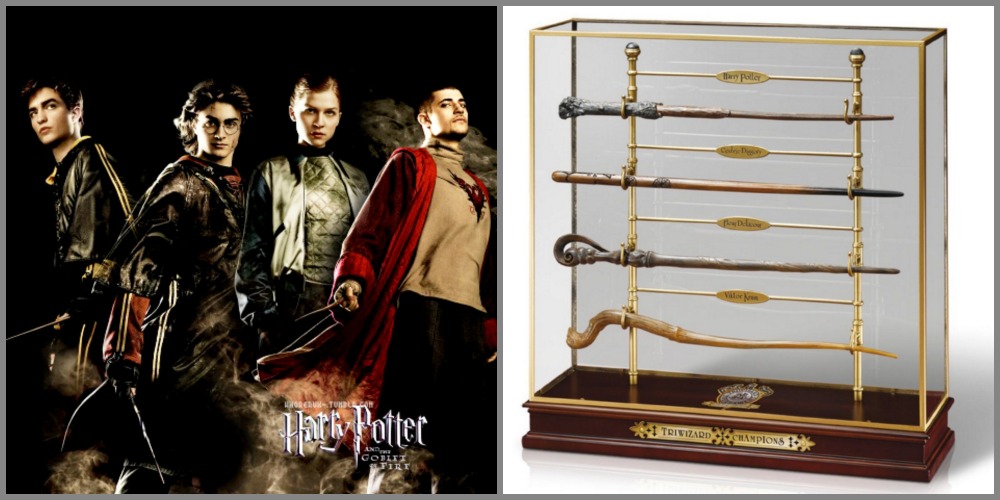 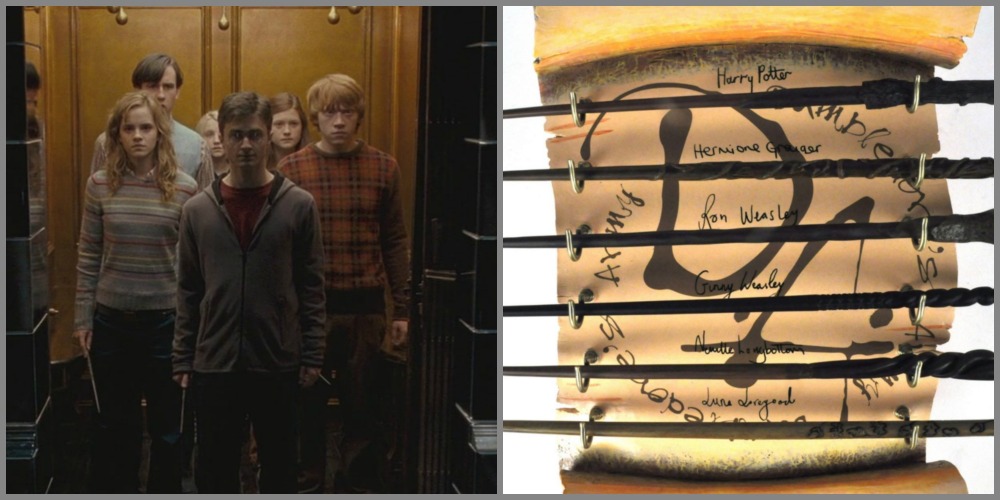 Formed in Harry Potter and the Order of the Phoenix, an organization drafted of students who are trained in magical combat and defensive spells in preparation for the coming war against Lord Voldemort and his Death Eaters that will be known as the Second Wizarding War. 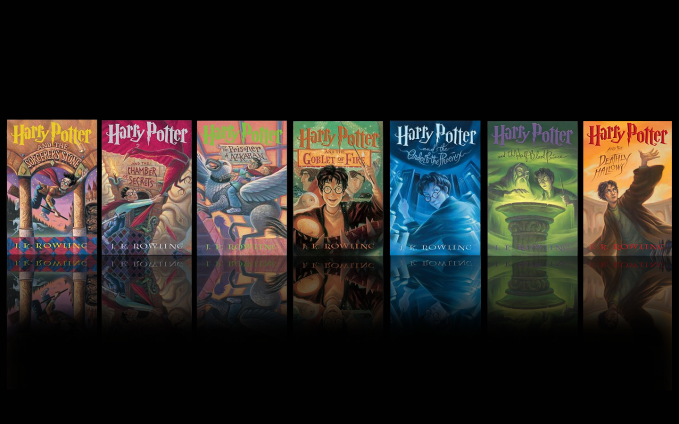 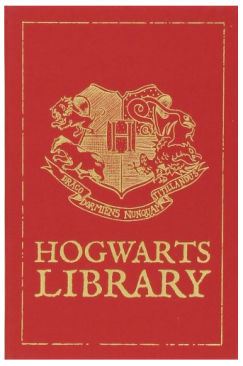 Hogwarts Library is a 3 book set containing textbooks from the story:
– Quidditch Through the Ages
– Fantastic Beasts and Where to Find Them
– The Tales of Beetle the Bard Now there have been many questionable book-to-movie adaptations but the Harry Potter saga is one to appreciate. It is difficult enough to produce a full length film and incorporating as much detail from the books as possible but I feel they did a great job in honoring the integrity of the books. But if you are a stickler for details, I suggest to stick with reading the books. You have to appreciate how casting the 3 main characters: Harry, Ron, and Hermoine to three actors to play for a span of 10 years in production is an accomplishment we may not see again in the world of cinema.

Wikia-based database of everything you need to know about the Harry Potter universe.

J.K. Rowling partnered with Sony to develop this site as a way interact with fans and explore unknown parts of the Harry Potter series. The site gives users insight into the thoughts of Rowling, some of her unpublished work, and other exclusive resources.

OTHER ARTICLES BY JAKESEPHER HOHENHEIM:
– Digital vs Film: The Cinema Showdown
– Artifact Documentary: A War of Music and Business
– Grimes “Art Angels” Album: A Sprite’s Delight